Read the welcome from Dr. Yingfu Li
Welcome to our newly updated website. I run a dynamic and motivated research group consisting of research technicians, postdoctoral fellows, graduate students and undergraduate students. My group continues to innovate with DNA by making various DNA-based enzymes (DNAzymes) and receptors (DNA aptamers) and exploring them for diverse applications.

We are looking for an exceptional and motivated post doctoral researcher experienced in functional nucleic acids and nano technologies to join a project that uses DNA bio-medical and bio-engineering methods to revolutionize the conservation world. This is the start of a boom in conservation DNA species detection technologies and successful candidates will gain global opportunities in a multitude of fields. Click here for a full description.

“The applications for such technology are vast, essentially replacing the need for expensive, complex and time-consuming laboratory DNA finger-printing that can hinder conservation capacity. This technology is nothing short of revolutionary.”

The Li Lab in collaboration with the Soleymani and Hoare labs have published our work to develop a rapid test for Porcine Epidemic Diarrhea Virus. Read more about it here https://onlinelibrary.wiley.com/doi/10.1002/anie.202204252

We’re excited to share our latest work on SARS-CoV-2 where we expand on our previous publications and describe an aptamer class that binds all major variants of concern with high affinity. This is an important tool for the development of aptamer based COVID detection technologies that can be specific, sensitive and robust for the detection of current and possibly future variants. Read more about our work here. -Jim

Aptamers are nucleic acids that are capable of recognizing target molecules. Over the past 30 years, thousands of aptamers have been discovered by scientists via in vitro selection technique. This review examined the range of targets as well as the affinity and specificity of ~1000 generated aptamers. By comparing the synthetic aptamers with natural riboswitches, protein-based recognition elements, a gap between synthetic aptamers and natural recognition elements was revealed.  A series of ideas for developing better aptamers were proposed to solve the real world problems. We hope these strategies can help aptamers remain high functionality in application environment. Happy reading 😊 – Shuwen Qian

Letizia will be joining the lab as a Ph.D. student. She will be working on stool biosensor technologies for applications in ecological protection. 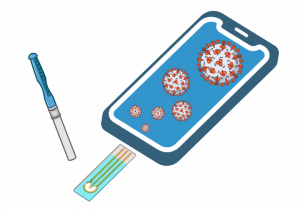 Following up on our recent report of high-affinity DNA aptamers for SARS-CoV-2, we’ve been busy working with our collaborators in the Soleymani Lab and the Biointerfaces Institute to apply them on electrochemical sensors. Read our latest COVID19 paper at Pubmed to learn more about how we achieve high sensitivity detection of SARS-CoV-2 in unprocessed human saliva to pave the way for a rapid and sample diagnostic test.

Take a quick look at our recent publication in Frontiers in Chemistry. In this paper, a simple and surfactant-free approach is presented to synthesize Pd-Ir nanocubes with atomic Ir shell thickness in an aqueous solution at room temperature. Biomolecules such as antibodies and nucleic acids have free access to the surface of Pd-Ir nanocubes. Applications of Pd-Ir nanocubes in immunoassays and aptamer-based biosensors are realized, exploiting the excellent peroxidase activity and fluorescence quenching ability of Pd-Ir nanocubes. Read more about our work at Pubmed. – Jiuxing

Finally had the opportunity to get everyone together for a group lunch, great to see everyone in person again.

The Li Lab welcome our newest member, Giulia Core, who will be joining us as a visiting Ph.D. student from the University of Glasgow. She will be working on molecular diagnostic technologies. 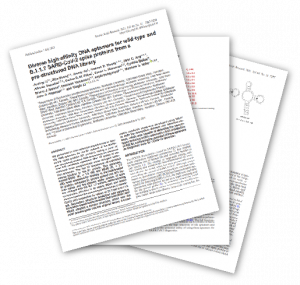 The Li Lab and our collaborators from across the McMaster community have published our first report on our novel aptamers for COVID19! The lab has refocused our efforts over the past year to address pressing COVID19 problems and we’re excited to finally be sharing our work. Read more about our work at Pubmed. 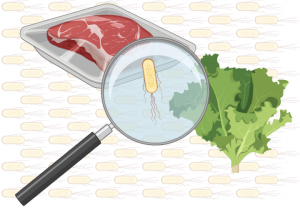 In a collaboration with the Didar Lab and Toyota Tsusho Canada, the Li Lab will be working towards the development of food wrap technologies for the detection of pathogenic bacteria using DNA sensors. Read more about it McMaster Brighter World. 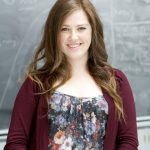 Li Lab postdoctoral fellow Erin McConnell has been awarded the NSERC & L’Oréal-UNESCO Women in Science Supplement. Congratulations to Erin for her fantastic work as a scientist and as a role model for young scientists around the world.

Explore the following links to learn more about Erin’s work and the work of the other great researchers recently recognized.

NSERC and L’Oréal-UNESCO For Women in Science Supplement

Congratulations to the Andres and Li Labs for a team effort in creating this Magic School Bus costume. The bus was driven to first place by Dr. Li as Ms. Frizzle and Dr. Andres as “Liz” the chameleon. 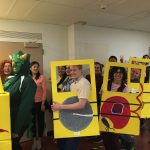 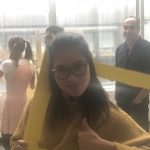 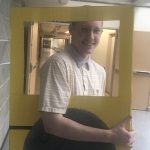 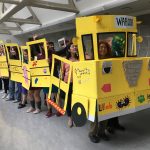 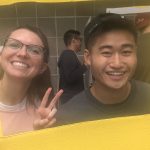 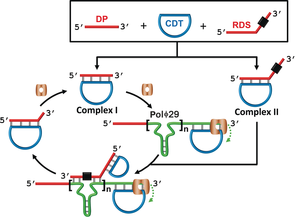 Take a look at this recent publication from the Li Lab in Angewandte Chemie International Edition. In this paper, we explore a novel signal amplification strategy termed DNAzyme feedback amplification (DFA). This method takes advantage of rolling circle amplification and RNA-cleaving DNAzymes for biosensing applications, with sensitivity improvements of 3-6 orders of magnitude when compared to conventional methods. -Suraj

Checkout this recent paper from the Li Lab in Scientific Reports, “Detection of DNA Amplicons of Polymerase Chain Reaction Using Litmus Test.” Here we report on a novel DNA detection method that combines the advantages of the polymerase chain reaction with the simplicity of a litmus test. The diagnostic capabilities of the platform is demonstrated using clinically validated stool samples from C.difficile infected patients. -Suraj

Yingfu as the “Crazy Cat Lady” and his gang of cats 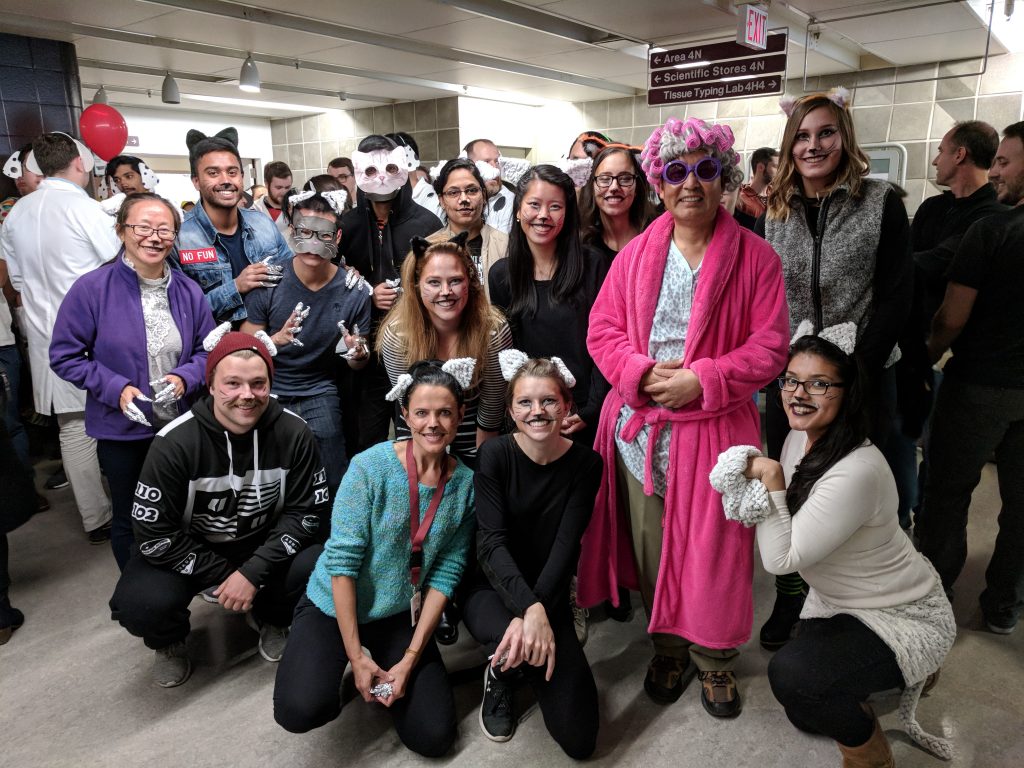 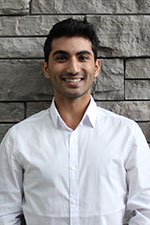 I am currently in my 3rd year as a PhD student in the Li Lab, and I am ecstatic to be a part of our efforts to develop colorimetric assays for a wide range of biologically relevant targets. I am currently working on the development of diagnostic assays that will enable detection of important cancer biomarkers.

Sepehr Manochehry, a PhD candidate in his 3rd year, earned the coveted CIHR doctoral scholarship this year. He was ranked 6th nationwide, putting him in the top one percentile among more than 700 other applicants. His success and the focus of his research was recently featured in a news magazine article. Read it to gain a better understanding of what motivates hard-working graduates students like Sepehr.  http://biochemrocks.freeflowdp.com/biochemrocks/2357984385961772?pg=23#pg23 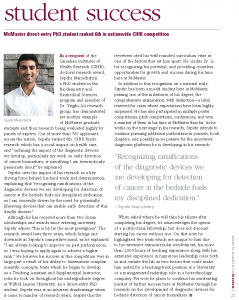 Checkout the Li Lab’s latest paper in Nature Communications! In a collaborative project between the Li Lab and McMaster’s Biointerfaces Institute, we report a novel reporter system based on mechanically interlocked circular DNA, rolling circle amplification and DNAzymes for highly sensitive bacterial detection.

Read about a new highly specific Clostridium difficile catalytic DNA biosensor in the Li Lab’s latest publication in Angewandte Chemie International Edition. You can also checkout the a profile of the report on the McMaster Daily News.

The Li Lab came together to participate in the departmental ginger bread house contest, coming up with a 2 part winter wonderland gingerbread house and Eiffel tower. Congrats to us on winning 1st place! Check out the rest of the details at the BBS Facebook Page. 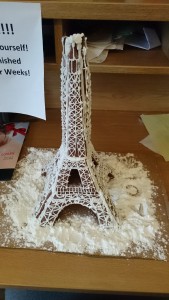 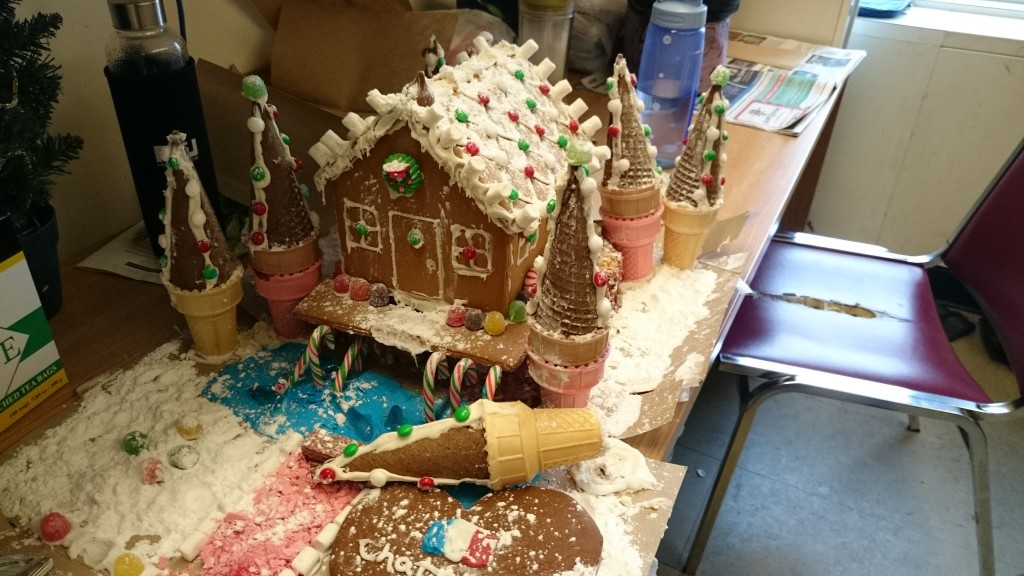 Everyone also came out to the annual Li Lab Christmas lunch. 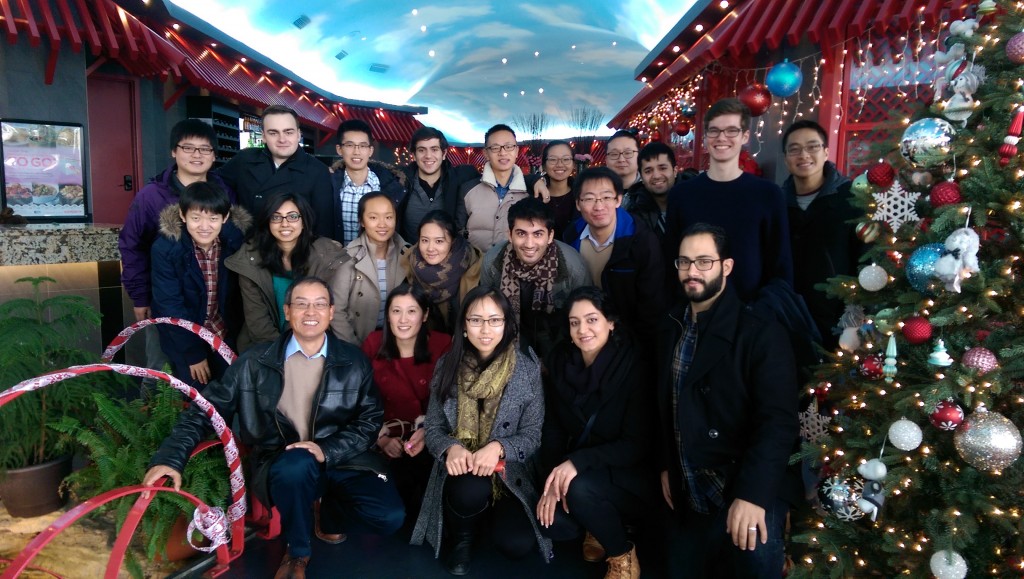 Finally, our 2nd annual Secret Santa was also a huge success and a lot of fun!

The Li Lab celebrated another Halloween with the Department of Biochemistry and Biomedical Sciences by participating in the annual costume contest. Graduate and undergraduate students united to put together a winning Cowboy Rollercoaster themed group costume. Visit the BBS Facebook Page to see all the other great costumes. 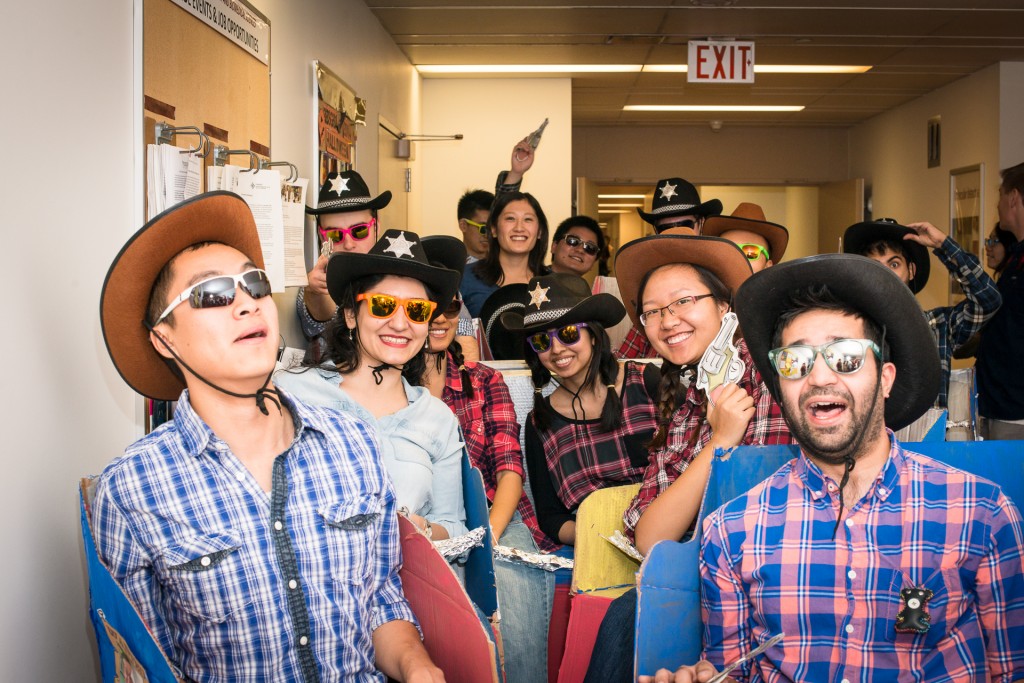 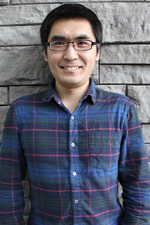 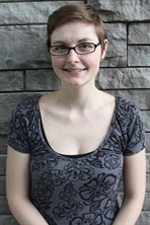 Last Sunday March 29th, five members of the Li Lab ran Hamilton’s Around the Bay Road Race, the oldest race in North America. Kha, Shahrzad and Zohaib ran in the 5 km race, while Dingran and Rachel joined Fazmin from the CMCB in running the 30 km race. The event was exciting and these members of the lab were thrilled to finish and receive medals celebrating their accomplishments. They’re looking forward to surpassing their times in next year’s race!

This year, the Li lab was proud to have three graduate students represent them at McMaster’s 3-minute thesis competition. On February 11th, Sepehr, Dingran and Rachel all presented their research to a non-specialist audience in less than three minutes. These three students made up three quarters of those representing the Biochemistry & Biomedical Sciences Department. Although none of them made it to the finals, they found it an interesting and engaging experience.

The holiday season was  busy time for the lab. As snow piled up outside, the Li lab decided to spice up the winter with the perfect combination of mystery and excitement – a Secret Santa party! Although Dr.Li offered to give the best gift of all time (designing a figure for any upcoming journal publication) unfortunately he was not able to attend the party due to a conference in Singapore. As the Li lab spends a lot of time with each other in the lab on daily basis, we saw each others’ inner playfulness reflected in our gifts. Kha received a colour-changing mug from Jim in which showed a molecular beacon figure when containing hot water.Some of us received mini Lego sets, stuffed animals and even a kitten book for bed time. Most of people did a great job disguising themselves and really made it challenging to guess the identity of their secret Santas. The party ended in everyone’s laughter and a group photo. We thank Dora and Qian for their enthusiasm to organize and host the event and we hope all our readers enjoyed a great holiday and a Christmas full of laughter! 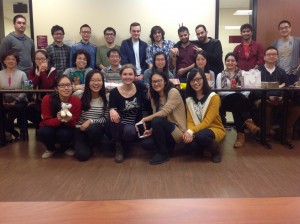 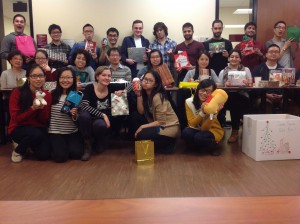 I represented the Li Lab at Spectrum’s Pitch Competition this past Monday evening. After presenting our innovative colour-based assay for heavy metals, I was selected as one of the 12 finalists out of 40 groups that presented. The finals is this Monday November 24th, at 6 to 8pm at TwelvEighty in McMaster University. There are prizes for up-to 2500 dollars for the winners of the competition. Everyone is encouraged to attend. Myself and everyone at the Li Lab hope to see you there.